Over the years I have had quite a number of “Woods Tools” .. Each of these “tools” had its pros and cons .. and I imagine I might  still  – at this late date – find one or a few that I ‘might’ Really Like .. But these are the 5 Best Bushcraft Survival Knives that I currently have and Use, and they would be hard to beat, I think.

…. Side Note: There are people out there who have paid Hundreds, if not Thousands of dollars for a Wilderness Knife, only for it to be stored away .. ‘they’ call them “Safe Queens”, or “Vault-Queens”

… (It has been my observation, over the years, that people like that tend to think of their gear as investments (and/or “Look At Me” Items), and rarely do you see a $500 knife “Living Up To It’s ‘supposed’ Potential” Out There.

Anyhow .. Let’s think about what we want to have with us, when we “Go Bush” .. Or when we find ourselves in a true Wilderness Emergency or True Survival situation:

My “Every Day Carry”

I carry (EDC) a “SpyderCo Tenacious” clipped in my “Strong-Side” Front pocket and a “Victorinox one-handed Trekker” in my “Weak-Side” front pocket.

These two ‘tools’ are with me Always, and one or both of them seem to find themselves put to use on nearly a daily basis.

On “Outings” (When carrying my “Trekking Bag”), I will typically add my “ESEE-6” knife (in a “hard sheath with pouch) .. and ‘often’ I will attach my “Leatherman Surge” to the outside of my “Bag”, where it is readily accessible.

On Multi-day Outings I will generally add my “Cold-Steel Kukri” and ‘sometimes’ a small folding saw, and usually a Shovel – Typically, that would be a small “Plastic/Fiberglass garden spade .. ‘tho If I anticipate a need for something more robust, I will take my Military E-Tool.

Another item I have often found good use for, Is a Small Hatchet – either my “Gerber Gator Combo Axe II” .. with Saw in the handle, or my Gerber “Shorty”  (a surprisingly useful small ax)

Needless to say, I generally tend to “Go Tool Heavy” .. (and some of the items mentioned above will be reviewed in future “Category Specific” posts)

OK .. Here is a description of 5 best Bushcraft Survival Knives – Tools That I have Known and Loved for an extended period of time:

Although Not usually thought of as Either a Bushcraft Knife Or a Survival Knife, this iconic Knife actually fulfills just about All of the requirements of Both.

I don’t recall when or where I acquired this Knife (probably found it at a Military Surplus outlet?), but it has accompanied me on MANY adventures in the past .. and has never let me down.

It is ‘relatively’ easy to “Field Sharpen”, and once honed to the desired “Sharpness”, It holds its edge well.

Although significantly lighter than the Becker BK-2 (see #2 below), it is a little longer, and quite easy to handle .. And, with the addition of the carbon steel “Butt-Cap”, some light to medium Hammering can be done (which is problematic, but not un-doable, with the BK-2)

My Wife got a Becker BK-2 for me as a Christmas Present, and for a few years I used it exclusively – as my Large Trekking and Camping Tool .. I took it “Out There” with me .. and Beat The Heck out of it, and for what it was* It served me Well ..  I liked it a lot ..

* (According to Dave Canterbury: “a Sharpened Pry-bar” .. ‘tho he later agreed, that in it’s favor, he had never seen one break, at his school)

It was easy to sharpen, and held an edge well, and it had enough heft to do some real work , and with it’s full flat grind, and great balance, it is actually capable of doing some finer tasks remarkably well.

Holding this knife in your hand, you get a feeling that it is just Rearing to Do whatever you want it to do .. and Wanting to Please you in any way it can.

The 1/4 inch width of the blade – preceded by the razor sharp “Flat ground” edge geometry, makes for Batoning  of branches up to about 3 inches a breeze (where a thinner blade would not be as effective at the job)

It is a little short for doing actual Chopping, but it will surprise you as to how well it tries to do the job,

I ground “Square” the coating off of the back of the blade, to make a spot for “Striking” sparks from a Fero-rod .. and or actual Flint .. as well as for Scraping fine tinder off of a dry branch

Mine came with the standard MOLLE compatible hard plastic sheath, which provided Numerous Attachment options, and Secure storage of the knife. 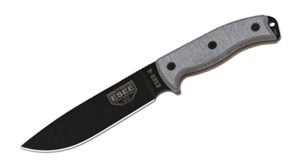 The ESEE 6P-B Plain Edge is built for extensive use, and like other ESEE knives is known for its quality. It has a lot of the features you would expect from an ESEE, and it also has characteristics that sets it apart from the others.

… (It also has one of The Best Guarantees in the industry – “If it breaks or fails in Any Way, ESEE Will Repair or  Replace It .. Forever!”)

The knife is 11.7 inches long, with the blade at 6.5 inches. Its drop point tip is suitable for chopping, cutting and slicing a variety of materials.

Heat treated to a 55-57 hardness,  the 1095 is definitely built for the serious survivalist.

It has a Kydex sheath that, while nothing spectacular, works just fine in terms of providing security and storage.

The Sheath that came with Mine also had a Pouch attached with a Stainless Steel “tin” inside.

The handle is made of linen micarta, offering a nice combination of comfort and durability.

The knife is also relatively light, at just 12 ounces.

The knife is just the right size: it is not too large to be unwieldy, but it isn’t too small, to be a Powerful/Useful Tool.

The blade is complemented by the full flat grind, so quality wise it is up there with other high quality survival knives.

The Plain Edge does not look “Tactical” and is more like a hunting knife. Do not let that deceive you though, because the Plain Edge can act as an effective combat weapon as well.

The blade’s drop point sets the tip near the middle line, giving you extra control. We also have to take note of the flat grind. This design serves as the appropriate compromise between a saber grind’s edge and a hollow grind’s razor sharpness. It also has a shallow finger groove on its choil. What this feature does is let you move your hand along the grip. It also allows you to position your index finger along the groove. What his means is you’ll be able to exercise more control when you carve.We also have to add that this is a full tang knife, so no need to worry about the blade suddenly falling off while you’re using it. Its handle is also among the most comfortable the brand has released, and yet it is durable. The Plain Edge also shines in the versatility department. Unlike other knives that can only cut or chop, the Plain Edge puts emphasis on flexibility.

Another “Knife” that I have grown quite fond of, is the “Cold Steel KuKrI”

A number of years back, I had gotten one for My Wife, and She wanted me to take it “Out There”, and Check It Out –  “Break it in” for her, before She added it to Her Kit, and depended on it In a Real Emergency Situation.

Well, I did just that – I ran it through every Camp and Bushcrafting chore  I could think of, and was Extremely Impressed* … Enough so, that When I got back a week or so later, I  immediately ordered one for myself, and it has been on Every extended outing I have gone on, since then.

(Note: I was Not “Destruction Testing” it, but I Was “Working It Hard!)

One thing I did note, on the one I got for myself, was that the blade grind was a little bit “Off” .. (Chopping  at an angle from right of center, bit in as would be expected, whereas at an angle from left of center tended to not “Bite” in nearly as well.)

I had not noticed the mis-aligned ‘grind’ before attempting to cut through a 4 inch thick branch … and I was “scratching my head” a bit, as to why the un-even cutting pattern.

Once I noticed the un-even Grind, it just took a little work, with a file, and then with a diamond “stone”, and that problem was fixed.

While I was working on the blade, I squared-off a couple spots on the back of the blade .. One, close to the handle, to aid in “striking” of a Ferro-rod … and a slightly larger area, for “Scraping” tinder from a branch.

And, I rounded/smoothed the back of the blade, where it was curved towards the pointed end, to make it easier/safer when using the Kukri as a “Draw-Knife. 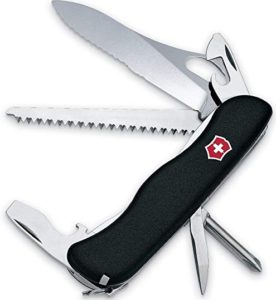 Interestingly enough,  My 1st Swiss Army Knife was one of the HUGE x-Tool Knives, that I found in the middle of a gravel country road, Miles from anywhere .. It was smack-dab in the middle of the road, and it was just a fluke that I noticed the “Red” .. I stopped and backed up to where it was, and I was Thrilled with that unexpected find (virtually brand new Swiss Army “Swiss-Champ”)

Anyone that is familiar with those particular “tools” knows that it is Not really suited for “Pocket” carry, but quite useful as a classic multi-tool.

I had and used it for many years .. (and “I think” it is still in the bottom of one of my tool boxes)

Jump forward to the 21st Century. In one of his early videos, Les Stroud (or maybe it was in one of his “Survivorman” episodes) had and used a Full-size Swiss Army “Trekker”, and I thought it was the2 perfect compromise between a simple one or two blade “Pocket Knife”, and a full size Multi-Tool, like my “Leatherman Surge” .. and as part of a Knife Swap, with other Wilderness Folk, I ended up with my current “Victorinox One Handed Trekker”

Can opener with small screwdriver

A Bushcraft Survival knife is an essential tool for the woodsman, hunter and survivalist.

From processing fish and game, and preparing food, to improvising or building a shelter, a Good quality Knife is indispensable.

But even if you are not an experienced survivalist, it’s still a good idea to have a “tool” like this, in case of an emergency.

Getting stranded in the woods, and not having a utility knife would not be a good thing!

Hopefully these observations will give you an idea of which Of these tools work best for My needs, And if you are wondering which one of these is the best survival knife, well I didn’t pick out just One.  All of these Bushcraft Survivaling  knives discussed here are high quality, and you really will not go wrong with any of them

Of course what works for Me may not for you, and that is why it is important that your read the reviews so you will know which of these knives is going to best serve your needs.