For people who are into – or who are considering – sleeping on the ground (in an improvised shelter, or under a tarp), this will either make you smile .. or drive you out of the woods .. lol

* A little background:
Between mid 1984, and mid 1990, My Wife and I were living in Port Angeles, WA – Yet, during that time I spent probably a cumulative total of 2 years Alone in the Wilderness.
I had a permanent campsite, and primitive shelter, established ( about 14 miles from the highway, and an additional 8 miles deep into the backcountry of Olympic National Park )

I would typically “Go Bush” for weeks at a time – Communing with Nature, Vision Questing, perfecting my Wilderness Survival Skills, and generally living on a primitive level – like just another creature in the wilderness.

Night of The Spiders
On the night in question : It had been a typical Fall day in the Olympics .. a little rainy, a little cool, a little windy, but in general a Great day. I had watched the campfire die down, Made a final pot of coffee, and snuggled into my sleeping bag, ready for a good nights sleep.

Just as I was drifting off, I sensed ( heard? ) something moving across the sleeping bag ( kinda the slightest rubbing / scratching sound ?? ) I tried for a while to discern what it might be, and although I wasn’t alarmed, I was curious, as I had not sensed/noticed that exact sound/feeling before that time.

Finally, I peeked out of my sleeping bag, and lit a candle, to see what if anything I might see.

When I lit the candle, what I saw was so unexpected, that it took a moment to understand what I was really seeing… 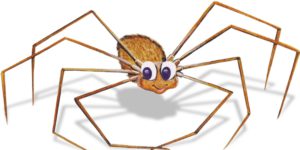 They didn’t seem inclined to come near my face or the candle, but were Everywhere else.

I watched them for a while, and could detect no pattern or method for what they might be doing – they were just wandering around all over me and my shelter.

After watching them for maybe a half hour, I just blew out the candle, wished them well, and went back to sleep.

When I woke up in the morning there was no sign of them ( other than a few that had been inadvertently squished under my bag ) – and in the rest of the time that I sojourned in the wilds, I have never again experienced such a thing.

It was, I believe, a Blessing, and a Gift ( of total acceptance by Nature? ) – and I appreciate it as such.